The foundation of Microsoft’s market dominance was born out of their bundling strategy. The company started by developing the early version of Windows as a disk based operating system (DOS) that proved to be very successful, and upon achieving an early monopoly with its operating system, Microsoft was able to offer discounts to its customers in a manner that priced out its competitors. For example, using the profits earned by the success of Windows, they could subsidize the bundling of the individual Microsoft Office products Word, Excel, and PowerPoint into one package, then priced the package at a low price other competitors could not compete with, thus ensuring market dominance of the Microsoft Office bundle.

This same strategy was used in establishing early market dominance over internet search browsers. In the mid 1990’s, Netscape was the dominant browser and considered a “superior product” to internet explorer. However, Microsoft decided to bundle internet explorer “free” with their Windows operating system, and since their operating system was so popular, Internet Explorer quickly gained 90% control of the market and Netscape collapsed. This is an aggressive ploy that is being reused currently with Windows 10. With this updated system, the new browser “Edge” is automatically installed as the default browser even if you originally had Chrome or Firefox etc. already set to default. This move from Microsoft angered the Mozilla CEO to the point where he wrote an open letter, complaining that, while it was possible to revert back to Firefox instead of Edge, the new Microsoft system’s interface does not make it “obvious or easy” to make this adjustment. 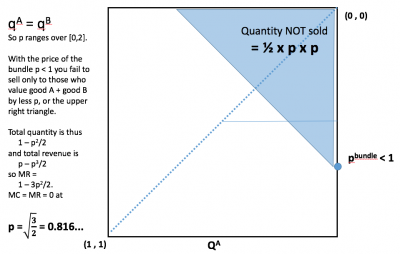 The theoretical benefits to bundling can be shown in the above two product example as part of the bundling notes on this site. As the theory states, when a company uses a bundling strategy, they expect to earn greater profits that if a company sold two individual products separately. An example of this process can be found through Nintendo and their attempts to sell platforms and games, with a catch that bundling is only profitable if you do it right. Research by a Harvard Business School professor showed that bundling only encourages consumers to purchase the bundled product if they also have the option to purchase the individual components of the bundle separately. For example, when a bundle was offered alongside individual products, a “mixed bundle,” Nintendo’s total hardware sales were “higher by approximately 100,000 units,” and “sales of video games jumped by over a million units.” In contrast, when the bundle was the only option for a consumer, a “pure-bundle,” revenues were 20% less than in the mixed-bundle scenario and total hardware and software units sold declined by 10s of millions.

Back to Microsoft, one of their most ingenious moves was to create a bundle of bundles called an “Enterprise Agreement,” in which they combined Office, Windows, and ‘The Core CAL’ (a bundle of license rights). From this, Microsoft have manipulated these bundles in such a way as to be able to introduce new products originally as part of the bundle, before taking them out of the bundles. Because of this, consumers need to purchase the side product at great additional cost, allowing Microsoft to reap “enormous cash gains” to the point where these side products such as the “System Management Server” have become billion dollar businesses in their own right.

Microsoft’s aggressive bundling strategy has obviously been hugely important in taking the company to its current position, and it will be interesting to see whether they can continue to use this strategy successfully.

Is Microsoft up to old bundling tricks?