BOF and EAF Steels: What are the Differences?

What is Steel? Globally, steel can be found in a variety of products and structures – from personal vehicles to the Burj Khalifa: the world’s largest skyscraper. But what is steel, and why is it so important? Steel is an alloy, meaning that it is made by combining iron with another element, usually (but not always) carbon. This alloy can be up to 1,000 times stronger than iron, making steel an extremely useful and sturdy building material (ScienceKids).

Though steel’s roots can be traced back to early human civilizations (Warrian, 11-2), it was not until the 19th century that Sir Henry Bessemer’s new process enabled the inexpensive production of mass produced steel. Once Bessemer’s process hit the market, steel production skyrocketed, setting the stage for continuous innovation in the industry. Today, two distinct processes make up the bulk of worldwide steel production: the Basic Oxygen Furnace process and the Electric Arc Furnace process (MSU). 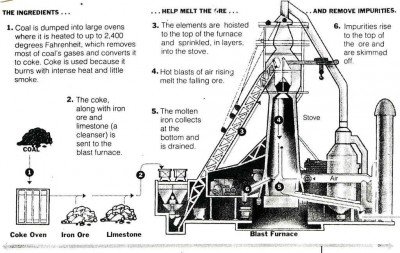 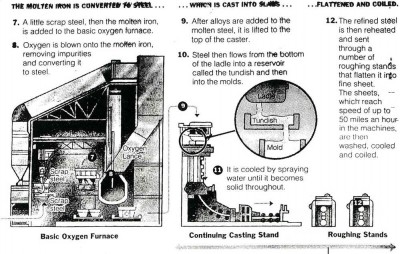 The Electric Arc Furnace The Electric Arc Furnace, or EAF, is an even more modern method of steel production. While the common inputs for BOF steelmaking are iron ore and coal,  the EAF furnace operates using scrap steel – steel already produced and ready to be recycled. Nucor, America’s largest steel producer, has made its fortune by popularizing the EAF process at a time when scrap steel making became more effective than the BOF processes of the very integrated firms in the late 20th century (Warrian, 60-2). The diagram below describes the EAF process (A.C.P S.r.l.): 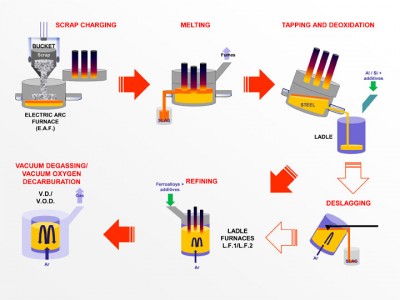 How do the Two Processes Stack Up? Although the BOF and EAF processes both produce steel as the end product, the varying means to this end between the two processes give each certain economic advantages and disadvantages. The main area of discussion centers around the supply side and the raw materials going into steelmaking. For BOF firms, producing steel requires sourcing a variety of raw materials, namely iron, coal, and limestone (MSU). Due to the necessity of securing these raw materials, early large scale steel firms like U.S. Steel (once the largest in the United States) found it economically viable to vertically integrate its production process backwards into coal and iron mining. Of course, these firms also controlled the necessary railroads, allowing for cheap sourcing of steel inputs (Warrian 27-32). 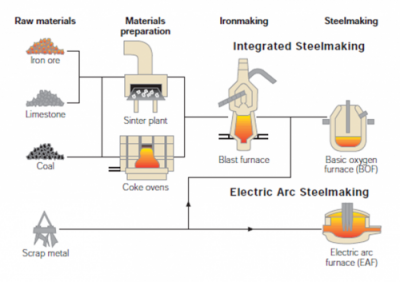 On the other side, EAF steelmakers have a much simpler input process: EAF furnaces only require scrap steel as the major input. As long as scrap steel remains plentiful in the market, these firms have easy and cheap access to the required raw material. As seen to the right, the supply sides of the BOF and EAF processes are very different (SteelConstruction).

To contextualize these two differing supplies together, raw materials make up 50% of BOF cost and 75% of EAF cost, with the difference between the costs of these inputs determining which is more expensive. However, in the long run, these cost differences even out (WikiInvest) – so what is the primary tradeoff between setting up a BOF mill and an EAF mill? The answer lies in capital costs. For a BOF firm, the average cost per ton of capacity is $1,100, while the cost for an EAF minimill per ton of capacity is only $300. The barrier for entry is thus lower for EAF firms, which can in part explain the rise of such “minimills” over the last half of the 20th century and into the 21st (WikiInvest).

Conclusions With Nucor overtaking U.S. Steel in the American market, it is evident that the industry is facing a period of change. Certainly, the steel industry will be one to watch as the Chinese economy continues to slow down and the industry again becomes mature with numerous players in the EAF game. But despite firms like Nucor’s success, BOF steelmaking still accounts for 71% of total global steel production, with EAF production only accounting for 28% (the last 1% is open-hearth steel production) (WikiInvest). Given BOF’s large market share, will the industry continue to be susceptible to broad changes like that brought upon by vertical integration at the turn of the 19th and 20th centuries and the EAF development in the late 20th? Or, will changes in input prices finally move the industry in one direction (EAF) or the other (BOF)?