How Amazon Keeps Expanding Despite Its Small Profits

In its early years, Amazon began as an online bookstore, but over its past two decades, the company has rapidly expanded into a becoming a household name. Amazon has now broken into many different markets by selling music, movies, electronics, and even household goods on its website. The company is known for having “Earth’s Biggest Selection” of products available through its collection of websites that utilize a cost leadership strategy to stay ahead in the market.

According to a report from July 2015, Amazon only made $92 million for the previous quarter’s profit. When comparing this margin to other tech giants like Google, which netted $3.93 billion that quarter, or even its inferior competitor eBay, which made $682 million in the same quarter, Amazon simply does not measure up. How can the company be expanding so rapidly with a net income so low? 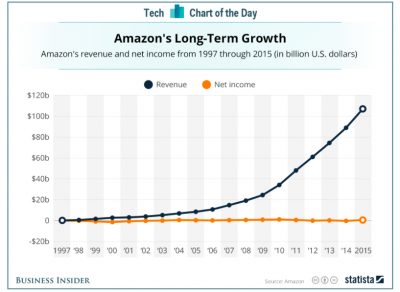 The secret to Amazon’s success can be dedicated to its unmatched business strategy. Throughout its existence, Amazon has been practicing a strategy called “purposeful investment” where although earnings are significant and large, the company puts most of its revenues back into the business to keep expanding. Although the company has only recently begun posting consistent profits (see graph 2), it has still been able to expand because of their continued large investments in research and development (see graph 3). These large investments help the company make the most educated and innovative business decisions and allow for major expansion. 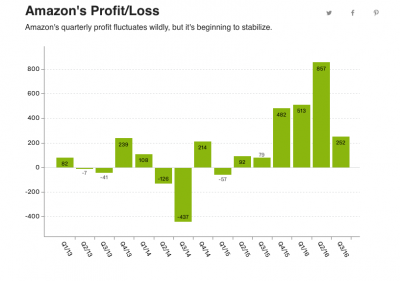 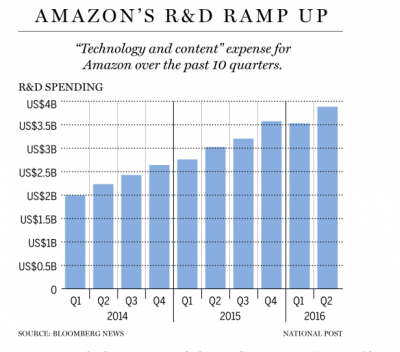 As a result of their investment in research, the company has been able to provide several benefits that set them apart from competitors. Some of the specific measures taken include: steep discounts for is regular members through Amazon Prime (The $99-per-year Prime unlimited shipping membership has proven a big driver of online sales), ensuring timely and even express delivery and at times, waiving off shipping charges, and conveniently selling a variety of products in one place to fulfill all of their consumer’s needs. The company works to maintain maximum utility and efficiency as well as strives to make the customer experience as seamless and as smooth as possible.

Some analysts do not believe that Amazon can continue its heavy purposeful investment and maintain sufficient profits to keep investing, but even as the company begins to generate more consistent quarterly profits, the company’s CEO Jeff Bezos isn’t backing down from the investment strategy. Constant investment is crucial for a business like Amazon because if its innovation were to fall behind, the company could be overtaken by competitors in its many different fields. Therefore, in order for the company to continue its successful tract, it must keep up the heavy investment.

Luckily for Amazon, it can afford to continue investing large amounts of money into research and development because the markets it is targeting still have plenty of room to grow. The company has begun creating a larger geographic footprint by entering the overseas markets of Mexico and India. The company has also already seen major growth in Amazon Prime membership in Europe and Japan. Not only will Amazon expand its scope, but the dominance will also continue well into the future for Amazon as its taps into new product and service categories. By working to implement same day delivery, Amazon hopes to be able to revolutionize the grocery business, a category that has yet to successfully translate to the internet. With continued large investment into research and development, it seems as though the sky is the limit for Amazon.