The median voter theorem as developed by Anthony Downs in his 1957 book, “An Economic Theory of Democracy,” is an attempt to explain why politicians on both ends of the spectrum tend to gravitate towards the philosophical center.  Downs, as well as economist Duncan Black, who proposed the theory in 1948, argue that politicians take political positions are far as possible near the center in order to appeal to as many potential voters as possible.  Under certain constraints/assumptions, Black says, the median voter “wins,” and the outcome ends up as a Nash equilibrium.  These assumptions are as follows: 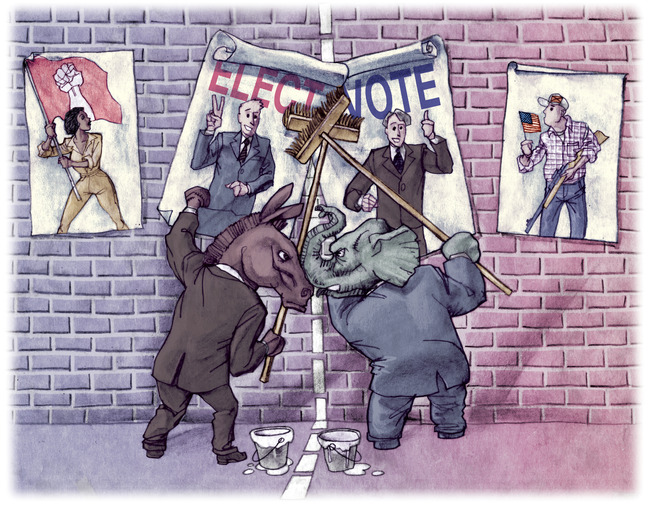 The polarizing nature of this most recent presidential election however has many experts doubting how empirically applicable the median voter theorem truly is.  The 2016 election was awash with fringe candidates, politicians such as Trump, Bernie, and Jill Stein represented voters with preferences much farther away from the median than had been seen in a long while.  Many argue that this is a result of party stances drifting farther to the right/left, however the positions of Bernie/Trump were substantially outside those even of their own parties.  Why?  Thomas Romer and Howard Rosenthal point out that cartels of “agenda-setters” are able to exploit the differences between median voter’s policy preferences and the actual status quo in order to articulate policies that come as close as possible to their (the agenda setters’) preferences as possible.  In US presidential politics, agenda setters are party activists and special interest groups, to whom candidates need to win favor in order to receive campaign funding.  For the Republican side Daniel Drezner of the Washington Post hypothesizes that fierce competition among GOP candidates for party favor caused many of them to shift “ever rightward” on foreign policy and many other issues.  He goes on to say that once one party begins to shift to one side, the other party is able to shift more and more to their side while still appearing to be relatively moderate.  This would explain much of the early success of Bernie Sanders and some of the more liberal stances taken by Clinton in the later stages of the election.

All-in-all, the median voter theorem does a satisfactory job at explaining why candidates choose the positions that they do, and how voters choose who to vote for.  However, the theorem will soon stand its strongest test as the Trump presidency rumbles on and partisan politics drift farther and farther from the median.

“The End of the Median Voter in Presidential Politics” – Washington Post

“The Median Voter Theorem and its Applications” – Joshua Palette

“Why Politics is Stuck in the Middle” – NYTimes