Tesla and its Host of Issues 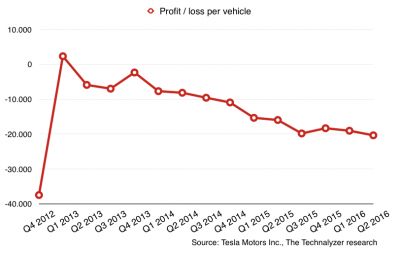 Elon Musk, considered a real-life Tony Stark by some, promised years ago to revolutionize the auto industry. It began with the Roadster, a premium luxury car experience which was followed by the Model X, Model S, and now the anticipated Model 3. Today however, Tesla seems to be running into a host of issues. The largest issue currently is that the Model 3 release date continues to be pushed back, with some estimates predicting that people who put a deposit down for the car in 2016 will not be able to receive their Model 3 until 2021. Out of the past 31 financial quarters, Tesla has only managed to post two positive quarters (it posted positive in the third quarter of 2016). As you can see from the graph, nearly every time Tesla attempts to sell cars it loses money. 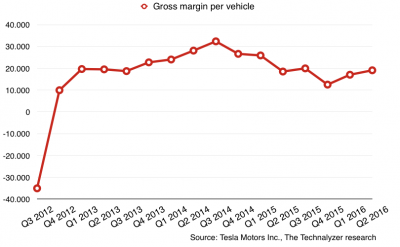 What is interesting though is that Tesla has a positive profit margin on the cars they sell. So where does the disparity lie? The disparity comes in Tesla’s massive R&D budget which drains any profits Tesla may actually earn. 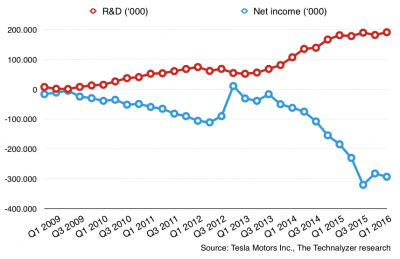 Furthermore, Tesla recently merged with SolarCity and Space X to form a trifecta of money losing companies. One additional reason SolarCity and now Tesla finds itself in dire straits is that states such as Nevada are rolling back their net metering programs which allow solar panel households to sell back their unused power to utility companies. Without these types of programs, solar panels make little to no financial sense. As Prof. Smitka aptly pointed out, combining three money losing companies into one is not exactly smart business.

So what is Tesla’s alternative business strategy? Well for one by asking consumers to put a deposit down on vehicles before they have even begun production allows Tesla to acquire valuable financial capital.  400,000 consumers already made $1,000 deposits on the Model 3 giving Tesla an extra $400,000,000 in financial assets. Furthermore, Tesla plans on operating out of its own dealerships, something other auto industries have attempted, but failed to do due to high operating costs associated with dealerships. Tesla hopes these dealerships will provide an added layer of unmatched service (we’ll see if that actually helps). Finally, with Tesla hoping to be one of the first fully battery powered cars to hit the market, Tesla has to operate and open more of their SuperCharge stations to make mass production and sales of Tesla vehicles even possible (imagine if Ford had to open and operate their own gas stations). One problem however, is that cars like the Nissan Leaf and Chevy Bolt are already on the market, long before the Model 3 will launch, leaving Tesla with only brand recognition left as its saving grace. Tesla may have to up its current $0 marketing budget to compete in such a competitive market or may find itself coming up short of its financial goals yet again.